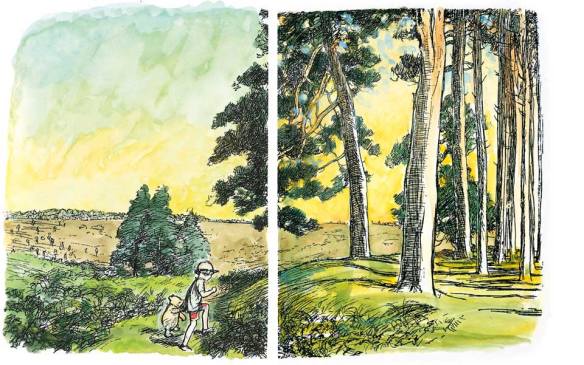 Galleons Lap by EH Shepard from The House at Pooh Corner by AA Milne. Illustration provided by Egmont UK and reproduced with permission.

“Childhood might be the time when connection with place is fiercest. As we grow up, the adult and the quotidian envelop us. Often, we set aside more than just our childish things: we vacate our childhood world,” from The ecology of Pooh, by Liam Heneghan.

This article grabbed my attention this morning; hopefully, it will yours as well. I have excerpted sections below that particularly spoke to me. But do click the link and read it all the way through. It is thought-provoking and relevant to us all.

“Since a person’s attunement towards nature is most often determined by youthful encounters with place, that which is most delightful to us in nature as adults is that which we remember from our youth. Thus, the landscapes of our adulthood, whether we have moved 300 miles or 3,000, tend to remain somewhat unfamiliar to us and, as a consequence, difficult to understand, much less to love. This is one of the neglected consequences of the great transplantation: I call it the Uncanny Landscape Hypothesis. Does this make it difficult for us to care for the landscapes in which we find ourselves, whether pristine, managed, or restored? Perhaps more positively, do we need new tools — tools of initiation, imagination, and empathy — to fit into a landscape that is new to us?

That we can read Milne’s Winnie-the-Pooh (1926) and Disney’s later adaptations through an ecological lens at all is a testament to the fidelity with which both Milne and Shepard, his illustrator, reproduced the landscapes of Ashdown Forest in Sussex in which the original stories were set. The Pooh stories captured a cultural landscape at a time when its human and natural elements were felicitously combined, as well as the special, intimate relationship between a child and that landscape. It is very clear that the boy (based on Christopher Milne, the author’s son) loved his bear, and loved the landscape in which they had their escapades.

The connection between children and nature has taken on considerable urgency in recent years. Evidence is accumulating that access to outdoor experiences is vital for children’s physical and mental health. The absence of such opportunities manifests itself in ‘Nature Deficit Disorder’, a term coined by the American writer Richard Louv in Last Child in the Woods (2005). Viewed from this perspective, Winnie-the-Pooh and the biographical elements the book imports from Christopher Milne’s life are an informative case study of the connections between a child and a landscape. Inside the house, Pooh is just a stuffed animal being dragged along by a cartoon boy; outside, all comes to life.

We could say, then, that the tales of Pooh and his friends are a celebration of ‘endemophilia’, a deep at-homeness in place and time. On the other hand, Christopher Milne’s memoir has elements of solastalgia, as in the pain he associates with the loss of those beech trees. Indeed, he warned the readers of The Enchanted Places that, though they could try to follow his map of the Cotchford terrain, they might not be able to do so, as the landscape could have changed. Solastalgia could be the ruling mood of our age.

But there is another sadness recorded in Christopher Milne’s story, a sadness that most of us experience, I expect: the loss of connection with place, especially a natural one, that happens as we grow older. I propose, in the spirit of Albrecht, to call this ‘toponesia’ (from the Greek topos, place, and amnesia, loss of memory). Even if the world stood still, we would still spin away from it, dragged into the orbit of our private economies and that series of mischiefs that we call our adult life. These psychological factors associated with Winnie-the-Pooh — its nostalgia, solastalgia and toponesia — combine to make the stories a surprisingly powerful meditation on place, as much as a source of simple pleasure.
* * *

The Winnie-the-Pooh stories express the powerful and intimate connections that we form as children, not only with our toys, which we imbue with life, but also with place, which serves as both cradle and companion. A larger inspection of the books (and the real life of their central character) manifests both the delights and the discomfiting aspects of our relationship with place. Connections with nature that many of us nourish in memory are hard to retain in adulthood. An inspection of Christopher Milne’s story brings to mind that we grow up and we change, as do landscapes, as do our relationships. We leave our childhood places behind us, sometimes literally, by thousands of miles, traversing several biomes before alighting like storm-tossed petrels in deeply unfamiliar territory.

Discovering how to develop an affiliation for new places might be the major environmental task of our age. Even those who do not move at all will find themselves in places that feel new, as habitat damage and climate change take effect. And, if we do leave, we need to learn to love the places in which we find ourselves.

What tools are available to us? AA Milne’s method was the vicarious: as Christopher Milne wrote in his memoir, ‘My father who had derived such happiness from his childhood, found in me the companion with whom he could return there.’ We can see the world with our children’s eyes. Recently, I saw a father leaning over his child who was enraptured by a bird hopping on a city sidewalk. Mimicking his child’s enthusiasm, he whispered in his best David Attenborough voice, ‘I think it’s a sparrow.’ We think we need to inculcate in our children a love of the wild, but I suspect we misunderstand the direction in which instruction must flow.

But there are other ways, I think, in which we could gain as adults a love for those places, uncanny though they might be, in which we find ourselves newly arrived, or in which old certainties are disrupted. My model in this regard is Tim Robinson, an English writer, who in the 1970s showed up on the west coast of Ireland. Over the subsequent decades, by dint of his map-making, his writing (about Aran and Connemara), and his scrupulous attention to people and place, Robinson has become almost synonymous with the West of Ireland. His basic methodology is walking and listening: just as Christopher Milne and his imaginary companions before him were wont to do. If we are to regain intimacy with this place, this Earth, we might have to take up again those ancient and revolutionary tools, walking and listening, listening and walking.”

Published on 5 March 2013 by Liam Heneghan in aeonmagazine.

4 thoughts on “ecology of pooh”