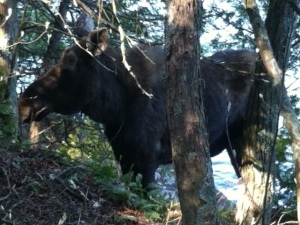 See the yearling standing there, trying to decide whether he’s between a rock and a hard place or just between the devil and the deep cold waters of Lake Champlain? A week ago he made local history by leading truckloads of Fish and Wildlife employees on a wild moose chase. They were trying to chase him back into the woods. Which is where he was until he leaped across the road right smack in front of my car, with them in hot pursuit. The end of the tale being, he led them to a shed housing several dozen plants of marijuana. Busted by a moose on the loose! Only in Vermont.

Look again at the photo, taken one week later. Poor thing was run ragged by the earnest fatigue-wearing men waving their arms to encourage the yearling back into the woods. Seems he backed himself right up to the lake and doesn’t realize he has an out. But he also doesn’t have either his solitude or his mate, who apparently is lolling about in a backyard less than a mile south on the same lake shore while he has become something of a local celeb, starving under trees that could feed him and mere feet from the largest dish of water imagineable. Which brings me to lesson #1 from  moose: There’s always an out. Sometimes it’s just so close we can’t see it properly. And because we feel that we are stuck, we don’t seek an alternate perspective, the one that might after all lead us easily from our experienced point of no return. Like coming right out and saying, “I haven’t taken the time for this blog in over two weeks,” rather than worrying about how to start up again.

By resisting his would-be captors – in essence, by saying a firm-hoofed ‘no’ – moose has found his way back to where he wanted to be all along. Quietly enjoying the woods. This second lesson resonates with me. It is definitely wise to take time to take care of oneself, to enjoy those things that truly feed us in every way. As an aside, it is also smart to spend time in your native habitat as much as possible. Keeps orneryness at bay.

But the biggest moose lesson is this: by deciding this young innocent was dangerous and a threat to local inhabitants, the well-meaning employees of Fish and Wildlife created a situation that now actually endangers the moose. I cannot help but be reminded of the enormous chasm we humans constantly put between ourselves and those we define as other – such as people of other cultures, customs, or belief systems – by confusing difference with moral judgment.

As I worry about the mooseling in the woods stranded at the edge of the lake in the midst of abundant food and water, I hope I am not the only one to take heed of the lessons he has offered. If only we would slow down and pay attention,  we could be led to stand firm on the ground of our own beliefs while opening our hearts and minds to the differences of those unfamiliar to us. As I always told my kids growing up, “different is neither good nor bad; it’s just different.”

PS Apparently he took stock of his situation and heeded his own best advice! He is no longer stranded.