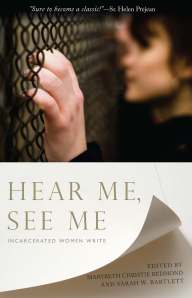 HEAR ME, SEE ME: Incarcerated Women Write is the collected poetry and prose of Vermont’s incarcerated women co-edited by myself and Marybeth Christie Redmond, and released by Orbis Books in September.

In 2010 we co-founded writing inside VT, a program using writing as a tool for self-exploration and change at Chittenden Regional Correctional Facility. This is Vermont’s sole women’s prison.

Since last fall, we have lived and breathed the book: first, selecting and compiling four years’ worth of writings, figuring out the most effective sequence; and of course, writing a killer introduction.

Then, after a brief lull while it went to press, we focused on organizing a major launch event for October 3rd. Since then, we have enjoyed a series of public appearances – on VPR, WCAX; and novelist Chris Bohjalian‘s column in the local paper – as well as a torrent of positive calls, texts, emails, Facebook posts and book sales with their attendant glowing reviews.

Today, an Associated Press interview of the writing circle went viral – from California to New England, Illinois to Mississippi. It even ran in The Washington Post and ABC news.

I guess I have to stop waiting for things to settle down so I can get back to my own writing . . .